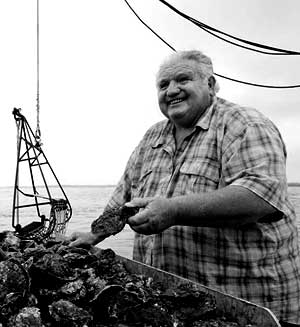 Born on Hoopers Island in Dorchester County, Ben remembers working with his father since he was “big enough to stand up.” A fourth generation waterman, Ben worked with his dad and his grandfather all the way through school until he went out on his own. When Ben was a boy growing up on Hoopers Island, he worked at Rippons Bros. Seafood cracking claws before school along with many of the others living on the island, “that’s just what you did”, Ben says.

Ben’s first boat was a 36’ traditional wooden workboat built by his grandfather in 1945. Out of that boat he pound netted, hand tonged, trot lined and crab potted. Like most watermen, Ben would do “whatever was going on at the time” to earn his living.

In 1985, Ben bought his 42’ boat ‘Joint Venture’ and in 2004 along with his son and nephew using a Markley hull built his current boat ‘Captain’s Lady’ which he now runs charters off of out of Church Creek.