History of the Industry 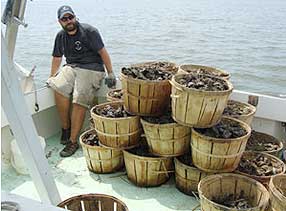 The history of the seafood industry in the state of Maryland dates back to the 18th century Revolutionary War era, when English settlers harvested Chesapeake Bay species like oysters, shad, and herring. The 19th century saw an increase in the need to transport agricultural products, and the use of railroads, canals, and steamboats became widespread. These new modes of transport had similar positive effects on seafood transportation and, in return, the industry began to grow, targeting oysters, shad, striped bass, blue crabs, and alewives.

By the beginning of the 20th century, 20 billion bushels of oysters were being harvested from the Bay each year. This led to a dramatic drop in oyster population. Other fish species’ populations began to see a decline, as well, as the range and mobility of commercial fisheries increased in the mid-1900s. This decline in population, coupled with pollution from poor agricultural practices and growing cities and suburbs, brought about a decline in the health of the Chesapeake that is still being battled today.

Today, Marylanders take pride in the Bay and the seafood it provides. The Delmarva-area seafood industry brings us a diverse range of fresh, local, and delicious seafood year-round. Unfortunately, the local industry is threatened by the availability of cheaper, lower quality seafood that is imported from other parts of the country and the rest of the planet. How can we stop this? By supporting local fisheries and always choosing local Maryland seafood-from the Bay to your plate!