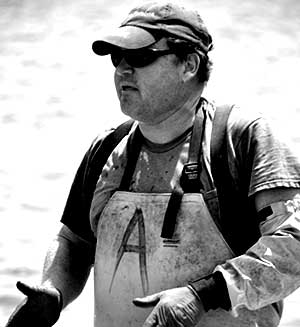 John is not the typical waterman; he was not born into this line of work, growing up watching his father work the water. John instead comes from rural Howard County. He is a Navy veteran who decided to quit the daily grind of being a construction superintendant to do something more fulfilling and that would allow him to have a better quality of life and more flexibility for him and his future family.

John is no stranger to the water; he served on the USS Brumby and had family in Talbot County that worked the water so he knew the challenges that would be involved in making this his career. Twenty years later, he’s taught himself everything he knows about being a waterman and hasn’t looked back. John does whatever the season allows for, crab potting, patent tonging, hand tonging, fyke and pound netting and oyster aquaculture. John has to do it all in order to keep his seafood business running. In addition to being on the boat and operating a retail business, he also finds time to educate students and adults alike about what it means to be a waterman. John is heavily involved in the education program at the Annapolis Maritime Museum and you can find him many days at the museum talking to kids who come in for field trips on the dock. John calls Galesville, MD home port for his boat “Patricia Anne” named after his niece.